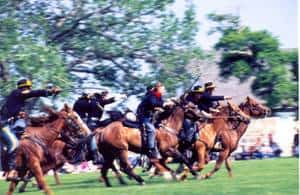 KA-BOOM!!! The sound of the Fortâ€™s cannon resonates as black powder smoke fills the spring air. A Cavalry General shouts the command, “CHARGE!” as he leads his army across the open prairie. From June 5-7, Fort Sisseton will again come to life.

“The Fort Sisseton Historical Festival started over 30 years ago as a way to promote the preservation and restoration of the historic buildings and grounds of Fort Sisseton,” said Katie Bogue, park manager. “It has now become a celebration of life at a frontier fort and life on the prairie in Dakota Territory.”

The colorful characters and unique opportunities are what make the Fort Sisseton Historical Festival such a great event. In addition to military re-enactors, firing displays, fiddle music and medicine shows, the Fort boasts activities and events that will cover the whole gamut of frontier life and settlement on the prairie.

New to the festival for 2009 include an old style photography booth, an antique tractor pull, historical presentations A Conversation with a Lakota Poet and Patchwork of the Prairie, and the Art of the Seven Council Fires Exhibit, which shares Native American history through photos of beadwork, quillwork, and hide painting. Interactive fun for the whole family awaits at this year’s Fort Sisseton Historical Festival.

* The annual festival is held the first full weekend in June and typically hosts over 20,000 visitors.
* Fourteen original buildings of the 19th-century frontier fort have been restored and are open to the public.
* Fort Sisseton was originally called Fort Wadsworth.
* The fort’s name comes from the nearby Sisseton Wahpeton Oyate Tribe, and is now part of a picturesque state park that unfolds the area’s history.

Information provided by the South Dakota Office of Tourism