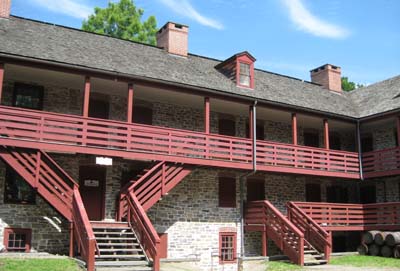 In the early morning hours of December 26, 1776, General George Washington’s Army attacked the Hessian Barracks at Trenton, New Jersey.Â  Washington captured many of the Hessians during the battle.Â  In 1777, the Barracks became an army hospital under Dr. Bodo Otto. The Barracks is located in downtown Trenton, next to the New Jersey State House. Rates are $8 per person, $6 students and seniors.

More photos of the Hessian Barracks

Want to learn more about Revolutionary War New Jersey?
Campaign of 1776: The Road to Trenton