Last fall, Vicki and I spent a great day at this week’s National Park Getaway  – Fort Scott, Kansas. Fort Scott was an especially interesting place for us to visit because of its role during the Bleeding Kansas period.  (As native Missourians, we’d heard a lot about this period in history)

The Fort is just four miles west of the Kansas-Missouri border, and was originally built in the tallgrass prairie on the edge of Indian Territory.

Fort Scott National Historic Site is a restored representation of a frontier fort built in the 1840s, maintained, and garrisoned by the United States Army. Today, the staff at Fort Scott preserves the site and brings to life the stories related to the opening of the West, the Mexican-American War, the Indian frontier, Bleeding Kansas, the Civil War, and the expansion of railroads.

Learn more about this “Crack Post of the Frontier” with this week’s Getaway article.  Also, don’t miss the article Vicki posted just a bit ago about the tall grass prairie project at Fort Scott.

Two of my favorite books about the Bleeding Kansas period are: 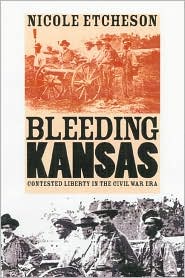