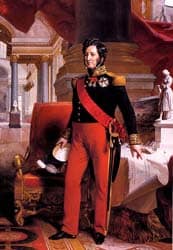 In 1796, the man who would become the king of France began a three and a half year journey through Europe and America. Louis-Philippe, whose father had been guillotined, decided to see the world–and keep a diary of his travels, Diary of My Travels In America

Louis-Philippe and his two younger brothers dined at Mount Vernon with Washington, smoked a peace pipe with the Cherokee, and toured Niagara Falls. During his journey, Louis-Philippe wrote:

“Like all the Indians hereabouts, the Cherokees have a governing council, this council being composed of chiefs. In t his nation the number of chiefs is not fixed. The council can make war and peace, conclude treaties, and pass laws. As there is no written language, the laws are not imperishable, but they are enforced with great rigor until they are forgotten.

The council recently passed a law on theft. For the first offense, flogging, and for the second, the ears cut off. This law has already been applied, and they say that those thus punished are thenceforth scorned by the others.”