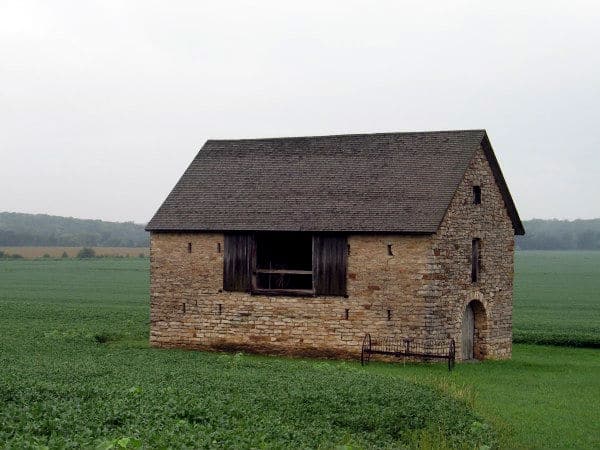 For the settlers on the frontier, the construction of a barn sometimes took precedence even over the building of a house.  With the inclement weather on the prairies and plains, shelter for their animals as well as storage of hay, grain, and tools was a high priority.  Nancy and I have seen many old barns on our travels, but this one southeast of Robinson, Kansas, was one of the most striking ones we have had the pleasure to visit.

John Dickinson, born in Virginia on 2/15/1803, moved to the Robinson area during the early 1850’s when land was being offered in Kansas for $1/acre, with each family allowed 1,000 acres.  After traveling to Kansas by oxen and wagon, the family lived in a sod house (which was located across the road from the Stone Barn) and taught school in the winter to help pay for their land.

The construction of the Stone Barn began in 1852 and was completed in 1861.  John and his sons hauled river rock by wagon from Atchison, Kansas,   and the timber from nearby land.  The timber was hand hewn and put together with wooden pegs.  The barn had three levels, the lower for horses and mules, the second for grain and hay, and the third for seed corn to be planted the next year.

After construction of  the barn, the family built a large house which was completed before 1861 and the start of the Civil War.  One of John’s sons enlisted in the Confederate Army, one in the Union Army.  Thankfully they both returned home at the end of the war.

In this photo you can see the ventilation openings which were put in where the grain was stored.  The walls of the Stone Barn are two feet thick and put together with mortar.

The Tietjens family who has owned the farm since 1979 have done substantial work to keep the barn in good repair.  In the late 1980’s a tornado tore off most of the west side of the roof, which the Tietjens replaced.  There was originally a dirt ramp leading up to the sliding doors that was removed as it was putting undue pressure on the barn wall causing it to bow inward.

The fact that the Stone Barn still stands 150 years after it was built is a testament to the men who built it, to their craftsmanship, and their dedication to the new lives they were establishing in what was to become the State of Kansas in 1861.

The owners of the Stone Barn have left flyers with the story of John Dickinson inside the barn on the second floor.  I thank them for being the caretakers of this wonderful monument to not only the Dickinson family but to America’s past.

How To Get to the Stone Barn in Robinson, KS