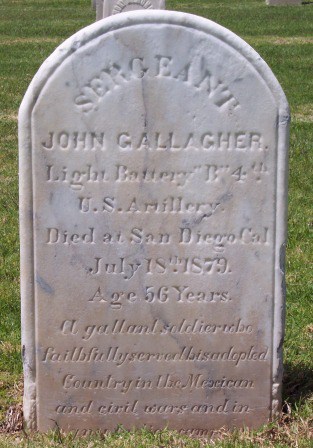 It started at the Fort Rosecrans National Cemetery in San Diego, California.

My sister and I were at the cemetery, taking photos to fulfill a FindaGrave.com request. But – as always – we couldn’t resist driving into the older section of the cemetery and walking back through the stones. An old tombstone caught our eye.

The inscription was to Sgt. John Gallagher of Battery B, 4th U.S. Artillery. A veteran of the Mexican War, Civil War and Indian Wars. A rarity.

The tombstone stated that Sgt. Gallagher died on July 18, 1879, aged 56 years, “a gallant soldier who faithfully served his adopted country”.

His service in three wars and his foreign birth were far too tempting for us to pass up researching.

First stop was GenealogyBank.com. After entering Gallagher’s name, date of death, and specifying California, we found a San Francisco news article giving the date that Gallagher’s estate went through probate and the names of the family members to whom he’d left money.

Most curious, though, was the fact that he left a sum of two hundred dollars to the men of Battery B for a “good dinner”. He then directed that any monies left over after the disposition of his estate be used for the benefit of Battery B. Clearly his Army unit meant a great deal to him.

Dead end. But not the end.

Because there was no mention of a wife in Gallagher’s obituary, we assumed that he was probably married to the Army, but we still checked the widows pension records at Fold3.com. There were none. This doesn’t mean he never married, it just means we have no proof of it at this time.

Here’s what we learned:

The Army records indicated Sgt. Gallagher was born in Derry, Ireland, and died of cancer in San Diego on July 18, 1879, the same date shown on his tombstone. Although what he was doing in San Diego we don’t know, as he was stationed at the Presidio in San Francisco. . . . for more, read Discover Your Family History Online