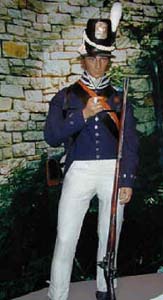 As part of an ongoing effort to commemorate the 250th Anniversary of the French and Indian War, a series of heritage events are planned throughout the Adirondack Region in 2008, with the opening of a newly reconstructed “king’s warehouseâ€ at historic Fort Ticonderoga topping the list. But this year’s historical events aren’t limited to one military conflict.

Historical re-enactments span three of America’s earliest (and most influential) wars: the

The Adirondacks were the home to some of those conflicts’ most pivotal battles, at least one of which is being staged again this summer on the historic grounds where it was originally fought. This year’s faux battles will feature a cast of history enthusiasts from the United States and Canada.
Key Events/Sites:

Fort Ticonderoga, formerly known as Fort Carillon, was built by the French from 1755-1758 at a narrow point between Lake George and Lake Champlain. This year the fort commemorates the 250th anniversary of the Battle of Carillon and the 100th year of restoration and public access at the fort. Due to its strategic location (in what is now Ticonderoga, N.Y.), it became known to 18th century superpowers as the “key to the continent.â€ It was the site of America’s first offensive victory of the Revolutionary War. This year, the fort opens up the newly restored king’s warehouse, which was blown up by the evacuating French in 1759. The completion of the building restores the fort to its original configuration.

The War That Made America: The Story of the French and Indian War (Music)

The War That Made America: The Story of the French and Indian War (DVD)

The French and Indian War: Deciding the Fate of North America (P.S.)

â€¢ The Grand Encampment of the French and Indian War will be held June 27-29 at Fort Ticonderoga in Ticonderoga, N.Y. This popular annual event will feature more than 700 re-enactors from all over the United States and Canada portraying French and British regulars, American and Canadian provincial troops and northeastern native groups. Events will take place throughout the day, including living history demonstrations, camp tours and period merchants offering a wide variety of reproductions. A battle re-enactment will be held each day at the fort at 2 p.m. featuring authentic 18th century battle tactics. On June 27 the Parade of Arms will be held in Ticonderoga Village with a re-enactment of a historic evening skirmish at the La Chute Falls. The sounds of musket fire and cannon blasts mingle with gun smoke and shouting officers as visitors are transported back to time of war.

â€¢ The Annual Fife & Drum Corps Muster will be held Saturday, August 2 at Fort Ticonderoga in Ticonderoga, N.Y. The event will feature fife and drum corps players from throughout the northeast.

â€¢ The Fort Ticonderoga Revolutionary War Encampment will be held at the fort in Ticonderoga, N.Y. September 6-7 when more than 500 re-enactors will gather to highlight the fort’s role in the formation of America. The event will include guided and open tours, 18th century vendors, as well as daily battle demonstrations.

The Battle of Plattsburgh Interpretive Center and War of 1812 Museum on Washington Road in Plattsburgh, N.Y. is a great place for history buffs to begin their journey back in time to one of the most pivotal battles in early American history. The exhibit retraces the battle and explains its historical significance while providing models of the 30,000-acre battlefield, among other things. Both Theodore Roosevelt and Winston Churchill referred to this battle, which included a land and sea attack, as one of the most important events in the War of 1812. Do you agree?
â€¢ The Battle of Plattsburgh Commemoration will be held September 6-14 in Plattsburgh. This nine-day celebration includes an 1814 encampment, early American artisan demonstrations such as spinners, coopers and blacksmiths. There will be a parade with military bands and several fife and drum corps. Drop by city hall and learn how an anchor from the British ship HMS Confiance brought about a totally unexpected American naval victory. (The anchor is on display at city hall.)A period dance is also planned.

â€¢ The Battle of Plattsburgh land and sea re-enactment will take place September 11-14 in Plattsburgh during the calendar dates of the actual battle; almost two centuries later of course. Re-enactors from the United States and Canada will lock horns in a recreation of the historic 1814 battle. Re-enactments will take place on land and water at the mouth of the Saranac River overlooking Plattsburgh Bay, the site of the original battle.

Fort La Presentation in the St. Lawrence Valley on the banks of the Oswegatchie River on Lighthouse Point in Ogdensburg was occupied by French, British or American forces during the years spanning 1749 and 1813. As the site of the last battle of the French and Indian War, it played a pivotal role in forming the United States and the country’s early relationship with Native Americans â€“ many of whom amassed and fought side-by-side with the Anglo forces gathered at the fort. A historically accurate reconstruction of the fort where the original once stood has become an increasingly popular staging ground for re-enactors and history buffs.

â€¢ Founder’s Day Weekend will take place July 19-20 at the fort. The event will feature re-enactments, a bateau race, sutlers, traders and artisans.

The Adirondack Regional Tourism Council is commemorating the 250th Anniversary of the French and Indian War until 2010 as part of an effort that started in 2003. For more information on these and other historical events planned in the Adirondack Region, check out www.visitadirondacks.com. Learn about a host of other Adirondack historic sites, such as the John Brown Farm â€“ home of the famed abolitionist’s final resting place â€“ and Camp Santanoni in Newcomb â€“ where President Teddy Roosevelt was staying when he found out President William McKinley was on his deathbed. Soon after leaving Santanoni, Roosevelt would become the 26th President of the United States.