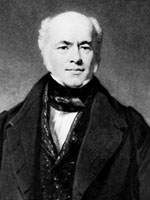 In 1796-1797, an English adventurer named Francis Baily braved the wilds of North America–a journey chronicled in Baily’s Journal of a Tour in Unsettled Parts of North America in 1796 & 1797 (Travels on the Western Waters).

Having traveled from England to America, via the West Indies, Baily then traveled from Washington across the Allegheny mountains, floated down the Ohio and Mississippi Rivers, then back to Washington via the Wilderness Trace – – later known as the Natchez Trace.

Of Philadelphia, Baily wrote “The Quakers are not so numerous as I expected to find them; they do not dress in that formal style which they do in the old country, except the very rigid ones. THe city is under an excellent police, and is one of the cleanest places I ever was in. The introduction of the yellow fever has taught them this useful lesson.

Here is a market every day, but on Wednesdays and Saturdays it is most frequented; and immediately after the market is over, scavengers are employed to sweep the streets and take away all the filth, so that in five minutes afterwards you would not suppose there had been a market held there for months. This scity is the present metropolis of the United States, and in fact is worthy of it; it contains by computation about 70,000 inhabitants.”

Note: When Francis Baily returned to England, he became an amateur astronomer and discovered “Baily’s Beads” – a phenomenon that occurs during a solar eclipse.