A year ago, Vicki and I sat on the banks of the Washita River, in present-day Oklahoma, listening to sounds of the past. This was  the site of Lt. Colonel George Custer’s attack on Black Kettle’s Southern Cheyenne winter camp – and the scene of an event that set the stage for years of conflict, as well as painting a stain on Custer’s reputation for leaving the battle without ascertaining the status of Major Joel Elliott and his troopers.

We’ll leave it to the historians to relate the course of the events that preceded the attack on the “Peace Chief” Black Kettle as well as the course of the battle and the aftermath.  We’ll stick with reporting what it was like to visit this – one of the best known sites of the Indian Wars – and how it felt to walk the 1.5 mile trail through head-high prairie grass down to the river to the Cheyenne encampment.

First, the Visitors Center.  An amazing building, designed to reflect aesthetics of both the Army and the Cheyenne. In the photo above you’ll note the curving walls that best reflect the Native American tepees while behind it are the oblique angles of a military movement. That juxtaposition carries through both outside and inside the building. For example, inside the Center you’ll find  a round skylight, mimicking the smoke hole in an Cheyenne tepee.

From the Center we had an unobstructed view of the Washita Valley.  Before driving down to the trailhead watched the film  Destiny at Dawn – Loss and Victory on the Washita. If you don’t know much about this battle, you will after viewing this extraordinary film.

Down to the Washita

We picked up a trail guide and began the walk down to the river. The booklet told us  what we were seeing; it was easy to recognize the  spots where major events took place, like the hill where other bands began to congregate after the initial attack, and the spot where the ponies were slaughtered. 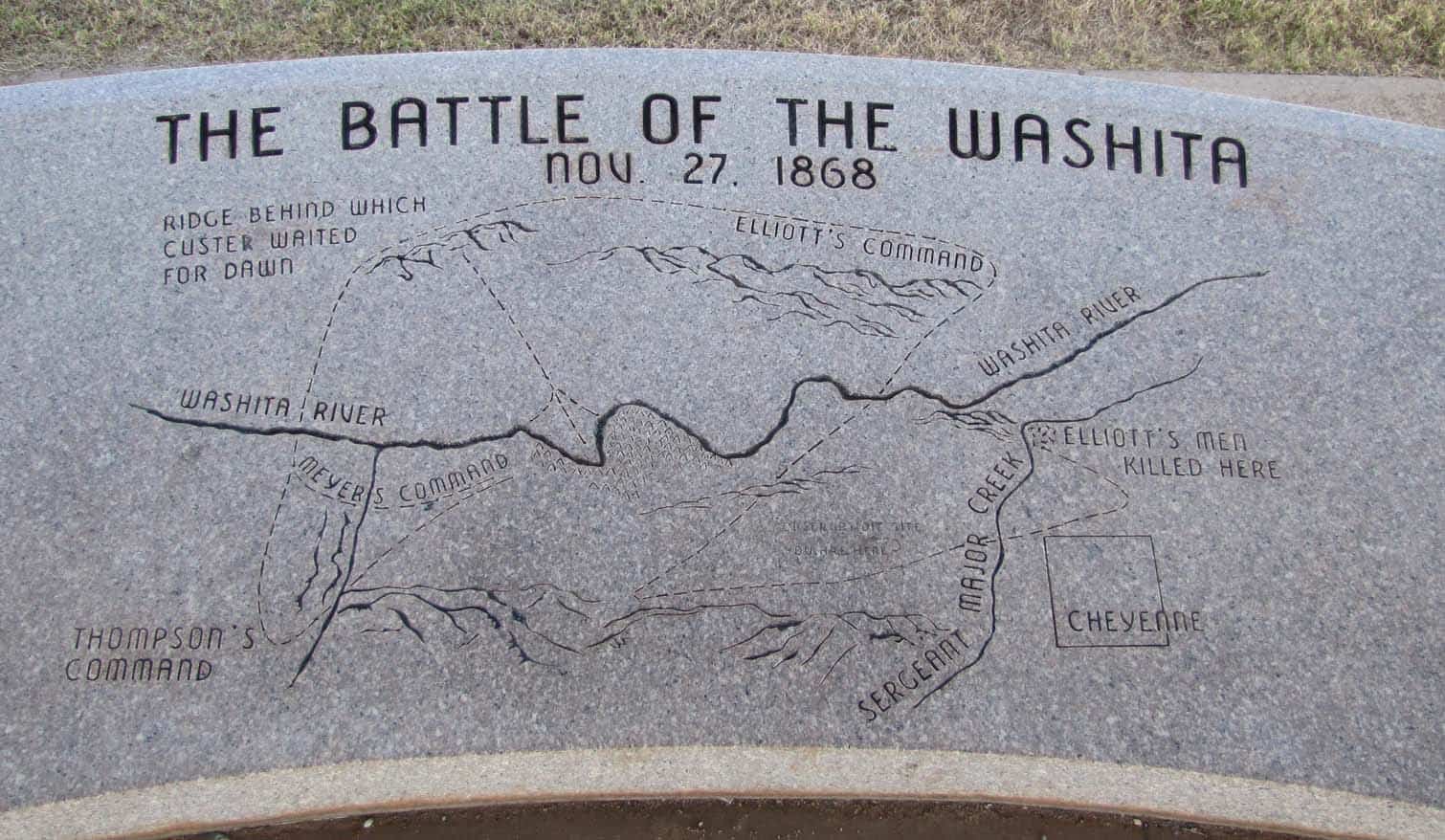 Click image to enlarge this map of the battlefield.

Once down the hill, we entered an area of tall grass – so tall, in fact, we could see how Indians could have hid there without being seen.  There was a path cut through the grass, probably 5 or 6 feet across.

At the river,  we stood on the spot where historians believe Black Kettle’s band was camped.  We had wanted to see this spot for so many years it felt much the same as the day we stood at the Crow’s Nest (Little Big Horn).  Vicki took a bit of video and I (not being able to resist) squatted down and put my hand in the river.  The Frontier Travelers had finally made it here.

While sitting by the river, listening to the sound of the wind in the prairie grass I swear I could hear a soft chanting. coming from somewhere on my left –  where they think Black Kettle’s own tepee had been. My imagination?  Maybe, but I know for sure ghosts roam here.

You know, the Washita is only one of two places I’ve been that I had the feeling that one wrong step would transport me back in time.  In fact, all the way down to the river I kept turning around to see if the trailhead kiosk was still at the top of the rise, or if we had stepped back to a freezing November day in 1868.

What if we had?

More About the Washita Battlefield

Washita: The U.S. Army and the Southern Cheyenne

My Life on the Plains: George Armstrong Custer’s Firsthand Account of the Washita Campaign