We’ve been fortunate enough to visit two sites relevant to the Buffalo Soldiers – the African-Americans who served in the U.S. 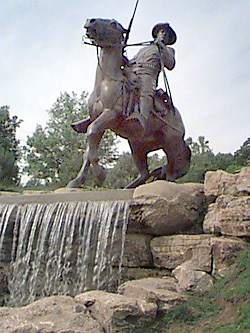 The name of Buffalo Soldier was originally given to the members of the U.S. 10th Cavalry Regiment of the United States Army, formed on September 21, 1866 at Fort Leavenworth, Kansas.  Eventually it described all of the African-American regiments serving in the Army.

On our visit to Fort Leavenworth, Kansas, we stopped by the imposing statue commemorating the Buffalo Soldiers. A soldier on a rearing horse sits atop a small waterfall, ready for action. The details captured in the statue is incredible, from the wrinkles in his trousers to his spurs and the muscles in his horse.

If you’re around the Fort Leavenworth, Kansas  area, be sure to stop in.  (While you’re there, you might also like visiting the gravesites of three casualties of the Little Bighorn – Tom Custer, George Yates, and James Calhoun).

In September of 1868, 50 frontiersmen under the command of Major George Forsyth of the 9th Cavalry, ran headlong into more than 1,000 Cheyenne, near present-day Wray, Colorado. The soldiers took up a position on a sandbar in a dry fork of the Republican River. The sandbar, according to later accounts, was about 90 yards long and 30 yards wide.

For days the soldiers were pinned down. By the time rescue came in the form of Lt. Carpenter’s 10th Cavalry – – called Carpenter’s Brunettes – the men on the island were reduced to eating rotting horse flesh. The Buffalo Soldiers were truly saviors on that day.

This event is called the Battle of Beecher Island – named for Forsyth’s executive officer, Lieutenant Fredrick H. Beecher who was killed in the fight.

We were fortunate enough to visit the site a few years ago; unfortunately floods and the changing course of the river have all but wiped away any trace of where the sandbar was once located.

You can see more pictures on our post about Beecher Island.

How to Get to Beecher Island

The site is located on County Road KK just west of the Arickaree River bridge. To get there from Wray go south about six miles on US 385 and follow the Beecher Island signs ten more miles.

Want to Know More About the Buffalo Soldiers and Beecher Island?

Terry C. Johnston’s The Stalkers (fiction – but Terry researched his works as well as any historian)